As we exited the entrance of Puerto Escondido, we spotted two fin whales off our port beam.  Giving them plenty of space, we make a larger turn around the point. An hour later, the winds were ideally forward of our beam.  So with both sails raised and the Hydrovane dialed in, we sailed straight to Puerto Balandra.  We used to say a bad day sailing beats a good day in the office.  But the sailing this day was perfect.  Ideal weather and wind conditions kind of sailing that removes any bad mood one may be carrying. We sail to the entrance of the bay, furl our headsail, drop our main, and set the anchor by late afternoon.  And just in time for happy hour.

The following morning Carrie delivered freshly baked homemade oatmeal cookies to our buddies John and Marcella on SV Beethoven and Bill and Nina on SV Gypsy. But only after stopping by the one other boat in the anchorage;  it turns out we met Mike on SV Interlude, Bellingham, in Bahia Salinas last April. It was a nice treat to chat with another nice cruiser.

We are fortunate to have cruiser friends who also enjoy hiking as much as we do. If any one of the three buddy boats suggests hiking, the other two say when and where.  But the following day four of the six of us hiked. We didn’t find any hiking trails so we scrambled up a ravine and then up a hillside of large rocks.  We don’t have pictures (!) from this hike because we were mainly climbing with all four limbs for handholds and balance. We climbed up one side of a hill and down another into a second ravine that leads to a dry river bed.  That is a nice segue for the post-hike swim. The swim afterward in the chilly 76-degree water was surprisingly refreshing.

The following evening Beethoven hosted a lovely sunset dinner on the beach with the large Cabrillo (pronounced ca-brie-yo) they caught earlier that morning.  We enjoyed drinks, getting to know each other, and the typical camaraderie, support, and laughter about boat projects.

The following morning SV Beethoven returned to Puerto Escondido.  Gypsy and we had a very chill day on our own boats.  But when both crew were topside on their boats, we shared the enjoyment of dolphins visiting the cove.  A typical chill day for Dharma Girl would include light boat work; like a 3rd coat of varnish on the bow seat, finishing installing the new insulation for the engine bay, making the second batch of limoncello, or reading, then a movie.  We probably squeezed a nap in too.

Compared to last year, we have sailed more since we left Puerto Penasco almost three months ago than half of last season.  Yes, we had ourselves another great sail to this bay, Isla Coronados.  There are big winds in the evening forecast, so after we set anchor close to the eastern shores, we and Gypsy stayed on our boats till morning.

Isla Coronados is one of the five islands parts of the Loreto by National Marine Park.  This is our fourth visit to this anchorage and our first time stepping foot on the beach. The first two visits were during the beginning of the pandemic and the Rescati Boat (park rangers) ensured no one was in the park waters or on the parkland.

During our next morning before we headed to Puerto Escondido, the four of us dinghy to the south end of the beach and found the nice trail system to mosey along.  With the limited amount of rain this past year, we were impressed with the number of green plants and flowers. The park system did a nice job of providing plant identification signage.  At a fork in the path, a large placard board provides additional information about the area.  And on it was a scorpion! Carrie’s first. The trails took us to two different beaches both as peaceful as the other.  At the second beach, we sat on beachcombing through the sand while Chris doubled back to use the ‘no bueno’ outhouse.  Later we walked the trails back to the dinghy and returned to our boats. While Chris started the watermaker and Carrie decided to weigh anchor herself and get us underway.

It was the calm before the storm with no wind to speak of, so we motored to Puerto Escondido.  The motoring can be dull, particularly listing to the motor, it is louder than a car motor.  But a nice trade-off and a pleasant surprise – we were graced with a wonderful catch of a beautiful Pacific Bonito, a fish of the tuna species.  So delicious and filling.  Fresh fish tacos are always good eats.

There was an available mooring ball a couple of rows closer than to the marina than our previous mooring ball. We are thinking ahead in case we need to make a dinghy run during the coming northers.  Also, another bonus is we can connect to WiFi more often.

Snatched from the Clutches of Near Death Once Again

Yesterday I (Chris) hitched a ride with Bill & Nina into the town of Loreto, 14 miles North of Puerto Escondido, to do some grocery shopping, the monthly peso run, and to stop by my favorite store, Ferremar, a boating and fishing hardware store. I broke our small and rather inexpensive spinning reel when I snagged it on something while casting from the boat in Puerto Ballandra.  I bought a new fancier one that should outlast us.  After making the rounds in town, we hopped back in their car and made the drive back to the marina. It was only blowing 18-20 kts and gusting to 24-27 kts about the time we both needed to make the dinghy run back to the boats. Not too much of a problem, as the anchorage is protected, and the fetch across the water only made the waves about two feet high and breaking on the dock at the outside end tie. That’s where we typically go to return to our boats.

After accessing the waters before us, Bill, Nina, & I looked at each other, took a big gulped, and said  “Doesn’t look that bad ….”.  Luckily, Bill noticed a way for us to sneak our tenders under the dock near the fuel dock and find a way out to some more relatively calmer waters.  It was a very wet and wild 10-minute ride though.  Again, not in ideal conditions – I had to make a big J-turn upwind, then crab sideways over to the boat in order to make it to the transom. At the boat, I got out of the bucking dinghy, my eyes bugged out.  Carrie tied the dinghy to the stern and helped me unload, and all was well once again after a few minutes to decompress.

Plans Are Written in Low Tide

So we didn’t plan to stay this long in Puerto Escondido. It’s been almost a month. Cruisers ask cruisers – so what’s the plan? And commonly, the answer is – ‘we just don’t know but we are thinking … (a brief explanation of plans is shared)’.  And this, this is an example why cruising plans must remain flexible. More often than not, an ( event/unexpected plan/surprise ) that changes the plans. And though we feel we have good practice for the unexpected, this time around it’s feeling a bit frustrating.  Here is how our stay has became extended.  The original plan was to leave on the 18th after Chris returns from visiting Pat in Cabo on the 16.  In the meantime, we found cheap airfare that would allow us to renew our tourist visa; that trip was the 16-17. But the morning of our flight, we learned the Marina Cafe can send back my Maui Jim prescription sunglasses to repair my frames (lifetime warranty) with a return date of 14 days. That puts us here till at least the 30th. We’ll let’s go out to Ballandra and Coronados for a change of pace (see above).  Now a three day northers is coming the 27-29th. Not going anywhere for three days.  Sunglasses are not in yet.  So let’s go to Punta Colorado for a couple of days.  We return. Sunglasses are not in yet.  BUT – Kevin and Gina, SV Raven, have returned from Portland, OR for another sailing season. So – we’d love to leave on the 7th when the weather is sweet to head south. But ….

To assure you, we are not complaining, just providing a snapshot of how cruising plans constantly change.

WHERE DID THE CREW TAKE

We, ok Carrie did, figured out how to post a thank you photo. Thank You Ralph and Andrea for the Beers!! 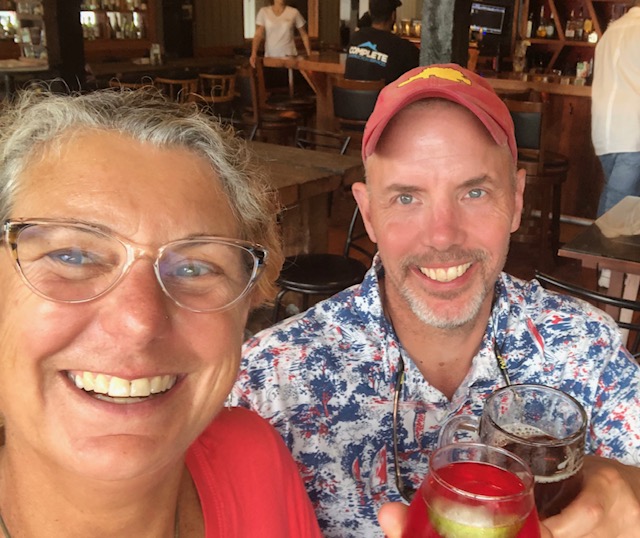