We’ve made our way north into what’s known as the middle Sea of Cortez, lying just north of Aqua Verde and south of San Juanico on the Baja side. Early May was time for us to help our friends get their boats ready to haulout for the summer season and make their way to their respective homes back in the states.

We found out shortly after we got down here that a great many people take off from the heat of the high summer months and return to their boats in the Fall. So we decided to try the same approach, making Puerto Penasco at the northernmost part of the Sea our port of choice, since it has a good boatyard and is nice and close the the US Border. We’ll be heading up there towards the end of June.

We pulled into Puerto Escondido and took a mooring ball for two weeks. Puerto Escondido is a really well protected anchorage, with a small marina and boatyard. It is a Fonatur Marina, which is one of the several marinas installed by the Mexican government you find up and down the coast. I was surprised to see how modern and meticulously clean the whole place was. Even with the pandemic in place, the restaurant was open, take-out only, but had a full menu. The tienda was well-stocked, and they provided a next-day provisioning service since we weren’t yet allowed to go into Loreto and shop for ourselves. Full showers, laundry, and almost one bar of cell phone service – what more could you ask for ?

We spent that first week of May providing moral support for our friends as they took on the not-so-small task of decommissioning their boats for life on the hard. Our key role was to take all their extra food off their hands; as it’s far easier just to hand someone a big box of stuff and simply get it off the boat and move on to other chores. Carrie and then restocked and re-organized our pantries.

Then it came time to wish everyone a fond farewell. Everyone found out at the last minute that the international flights from the local Loreto airport were effectively canceled through May, forcing a five hour rental car trip south to fly out of the Cabo San Lucas airport instead. But everyone made it home and we’ve heard from them enjoying their summers in Portland, OR & Seward, AK.

We also did a Zoom meeting with Katie, Scott, Omar and Gynnie one night. It was a lot of fun despite the fact that we were out on a dark dock with the laptop trying to keep a signal going. Apparently I sound like Steven Hawking on low bandwidth.

While we were in Puerto Escondido we did do the local hike to Steinbeck Canyon, named after John Steinbeck and his book The Log of the Sea of Cortez. There’s a tall mountain range (I believe it’s called the Los Gigantes) that backs the port and Highway 1, and it is rather stunning. The hike takes you up into a steep, boulder strewn canyon. We made it as far as the palm tree in the Sean & Heather Guide. (This is the local cruiser’s guidebook, written by a couple named Sean & Heather … everyone just calls it Sean & Heather, not the Sea of Cortez, a Cruiser’s Guidebook, 2nd Edition).

We hung out a lot that second week. I dove the hull and cleaned the bottom, which was oh boy, a little overdue. I rented a car one day and made a run into Loreto to use the bank and the farmacia, which was allowed as essential travel. Sadly, I discovered the local ordinance that banned all liquor sales through the end of the month. No Modelerama pormigo. However, the tienda back in Puerto Escondido still sells beer, tequila, and wine at a nice markup. Ouch. Beer especially as it is now really scarce across Baja.

We got our despacho from the Port Captain, finished all our last minute laundry, and made our way all the way over to Honeymoon Cove on Danzante Island – five long miles from the entrance to Puerto Escondido. We actually tried to stay in Los Candeleros farther south but couldn’t find a good place to anchor as it was pretty full of boats and windy. Candeleros is popular because it sits off a 5-star golf resort with 4G LTE broadband cell phone signal. No Facebooking for us.

Honeymoon Cove is delightful – it’s three small anchorages in one little cove, the southernmost is called Mother-in-Law Cove, and there’s another that’s called Divorcados. We spent a few nights there, and exchanged cookies for drone footage of our boat with Don & Julie on SV First Light. We both did short hikes separately but both felt paranoid we might be breaking a rule.

We had heard you could hike at Bahia Salinas, so we made our way over there. There was also a small norther in the forecast and we wanted to be better protected. We walked the beach and took a small look at the old, abandoned salt mining that is still there. From afar, the little town looks just like the set of an old Clint Eastwood western. We took a dip at the beach, watched all the pelicanos, did some star gazing.

From there we went around Punta Perico to Bahia Cobre. We really loved Bahia Cobre, sharing it with new friends Steve & Jen on SV Solstice. We’d heard them on the morning net for a long time. Steve & Jen are avid spear fishers, and shared a huge portion of fresh Cabrillo with us. They’d stop by on their paddle boards and chat as they went out to fish every day. A small world story – their boat was formerly Hello World – owned by a Seattle couple whose blog I had devoured end-to-end when I was working. We hiked the island, and Carrie sighted her second Bighorn Sheep. (They are too quick for a photo.) They keep a herd on the island, and then the rangers open up hunting season to manage the herd size.

We tried Painted Cliffs, but decided to move on to Puerto Ballandra. We simply couldn’t see any cliffs that looked like they were painted, but perhaps it was the morning light and not sunset. I dunno, maybe no one will stop at an anchorage called Cliffs with Small Beach, or Rats! Somebody Else is Already in the Good Spot. 🙂

Wrapping up our grand circumnavigation of Isla Carmen, we stayed at Puerto Ballandra. Our good old friends Tom & Katie arrived! We had not seen them since way back in La Cruz. It was so great to catch up and reconnect. We hiked inland back across the island, hoping to make it back to Salinas, but ended up stopping 3/4 of the way at an old well. It was a good long hike, but getting hot. The dip in the water at the end was welcome and refreshing.

Loreto, then Back to Puerto Escondido

We decided to double-back to Escondido for some logistics and then make our way north. We first anchored outside of Loreto and were able to go into town after getting medically cleared by API and the local ambulance service. They simply want to keep a log of people moving about and took our temperatures to ensure we did not have signs of fever.

Loreto is very charming. It is very nicely developed, with modern infrastructure – the streets are all well marked and clean. There’s a distinct lack of condo development, and the central square is really cute. Walking through, you could imagine it filled with tourists on a nice summer evening. The marina is small, really intended for local pangas and filled with pelicanos.

Our afternoon in Loreto was productive – the super-friendly Immigration office renewed our FMM cards – Tourist Visas for us, and we made essential stops at Ferre-Mar and the Ley Supermercado. We needed to come back the following day for our FMMs, so we rented a car and made another final provisioning run.

It was a quick stop in Puerto Escondido – three nights. We’re now on Isla Coronados, it’s Memorial Day weekend. We’re sharing the anchorage with Tulum V, Kyrie, and waiting for Absolute to make their way over. Then we’ll head up to Caleta San Juanico. More on that Later.

As always, if you’ve read this far, thanks so much. We’ll write again soon, as I see from our photos that we’ve made a giant leap over the southern Sea. 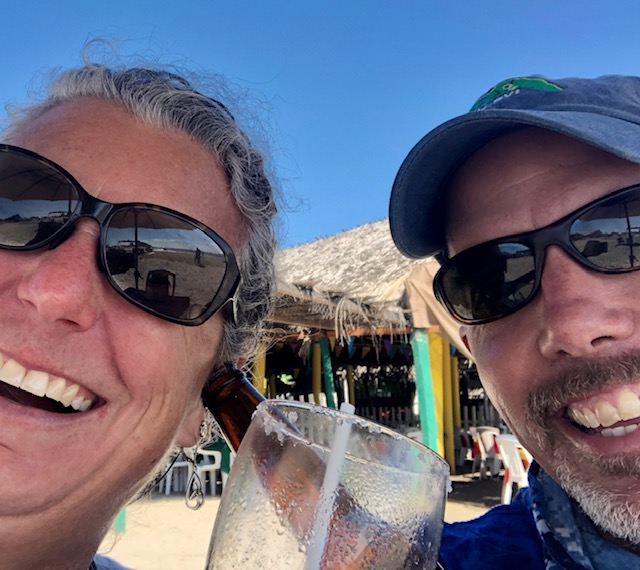